Regulation (EC) 1332/2008 has entered into force in January 2009. It regulates the use of food grade enzymes in the European Union. Among others, this regulation aims to establish a positive list of enzymes, which will be allowed to be used in food after an evaluation by EFSA, the authorization by the Commission and the vote of the Parliament.

Manufacturers of enzymes were asked to submit dossiers for their enzymes before the deadline in March 2015. The dossier for Ajinomoto’s transglutaminase from Streptoverticillium mobaraense (strain S-8112) has been submitted in time. It is currently under evaluation by EFSA. Updates on the evaluation process can be found on EFSA’s internet site. 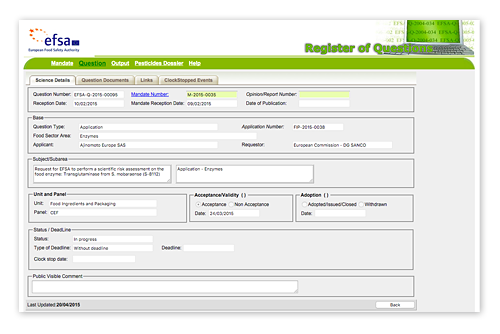 Until the positive list has been drawn up, food enzymes and food using food enzymes may be placed on the market and used, in accordance with the existing national rules in the Member States.